This page describes what is important for apartment building owners, syndics and property developers to know when FTTH is rolled out in their street (if it is next to their apartment building) and regarding in-building connections. A summary is also given of the existing obligations when you are planning to construct a new house or want to carry out a (considerable) renovation.

On the “homeowners” page the rights and obligations of homeowners and apartment owners are explained in detail.

Deployment in your street?

Operators are entitled to install cables free of charge on façades of houses to roll out their networks. Therefore, in principle, you cannot refuse the installation itself (see Article 99 of the Act of 21 March 1991 to have a detailed description of the rights and obligations). The same goes for maintenance of those cables. This does not mean however that you are obliged to connect to the FTTH network (whereby the fibre is introduced into your home).

Nevertheless, the operators have to inform you beforehand about where and how the work will be carried out. Moreover, you have the right to object if you have not received enough information or if you do not agree to the proposed manner of execution. In that case the operator can try to reach an agreement after all.

In case of persistent disagreement, the operator has to send you a registered letter clearly describing the planned location and manner of execution of the work. You can object against this before the BIPT. The objection should be made within eight days following the receipt of the registered letter from the operator and should be motivated. The consequence is that the operator cannot continue with his plans until the BIPT has taken a decision.

This does not mean however, that afterwards, you will not be able to carry out any work anymore whereby the cabling has to be moved (however, the work must not purely aim at doing just that). To do so you have to inform the operator two months before the start of the work by registered letter. In that case the costs for moving the cables are borne by the operator.

There is an obligation (the Broadband Cost Reduction Directive, see page about the BCRD for more information) to make sure buildings are broadband-ready in case of new construction or major renovation works. This means that the building should be equipped with an access point and in-building physical infrastructure between the building’s access point and the network termination points of the apartments. There can be deviations from this obligation, depending on the choices made by the competent regional authorities (see the Flemish, Walloon and Brussels regulations).

In-building physical infrastructure means infrastructure intended for the operator to lay his cables, typically ducts through which cables can easily be pulled.

The access point of the building means the location where the telecom operator’s network enters the apartment building (often a cellar or technical room) and where the operators can easily administer their connections to the various apartments.

The network termination point is the point where the cable enters the end-user’s apartment. This is illustrated in the figure below . 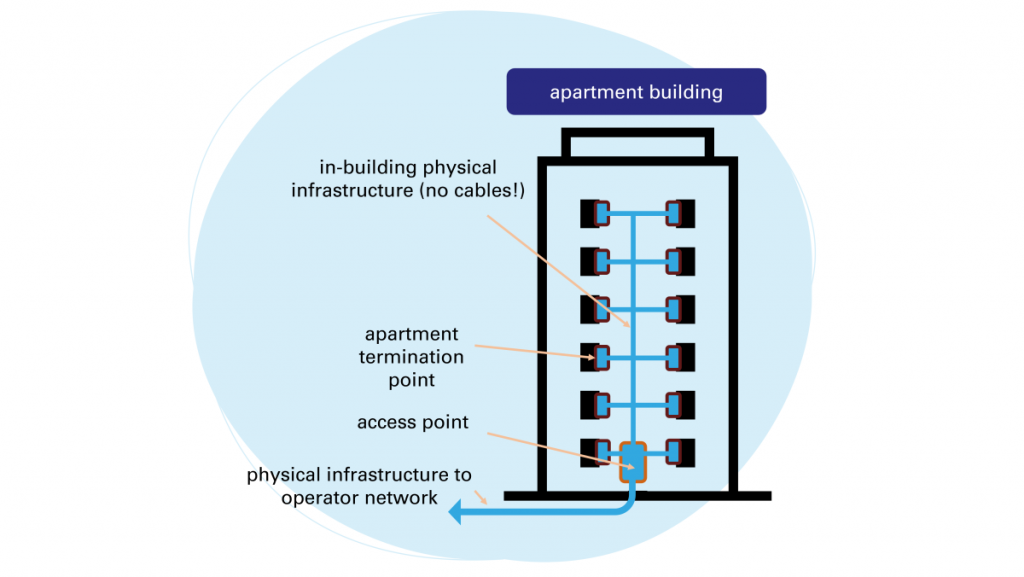 The presence of an access point and in-building physical infrastructure is always mandatory even if the municipality does not impose this condition explicitly during the permit process. Therefore it is not required for the condition to be included in the permit.

Every operator has the right to roll out his network up to the access point (according to the Broadband Cost Reduction Directive): the relevant provision in Belgian law is Article 100 of the Act of 21 March 1991, which says that all work done on cables and associated equipment in, against and on buildings with a view to making in-building connections to that operator’s network, should be allowed by the owner, unless he is prepared to bear the extra costs of a counterproposal.

Moreover, every operator has the right to access all existing in-building infrastructure, see below.